Today we are looking at chapter three in Nancy DeMoss Wolgemuth’s book Choosing Gratitude: Your Journey to Joy.

My heart broke as I read the true story Nancy uses to introduce the theme of this chapter. The story begins on September 7, 1860, a little over seven months before the beginning of the American Civil War, and focuses on the heroic actions of Edward Spencer, a young seminary student who risked his life to rescue the victims of the doomed steamship Lady Elgin.

The Lady Elgin was carrying more than 300 passengers and crew on a sightseeing tour from Milwaukee to Chicago when it was struck by the schooner Augusta. Most of those aboard the Lady Elgin perished wheny the ship broke apart in the waters of Lake Michigan. But seventeen people were saved that night by Edward Spencer, who battled the breakers for six hours. An experienced swimmer, he had a rope tied to his body, and swam through the waves to grab exhausted passengers.

In the process, this young seminary student received numerous injuries from floating wreckage which changed his life forever. Never able to fully recover from the physical toll on his body from his act of bravery, he had to give up his dream of being a pastor and spent much of his life confined to a wheelchair. Yet, the most important thing to Spencer, according to his brother, was not whether he should have risked his life and livelihood to rescue these seventeen people. His biggest concern was whether he had done his best for Jesus.

Nancy gives a sad postscript to this heroic story. When later asked by a reporter what stood out to him the most about this life-changing experience, Edward Spencer replied, “Only this: of the seventeen people I saved, not one of them ever thanked me.” Those words brought tears to my eyes.

A similar story is told in Luke 17:11-19. I especially like the Message paraphrase of this story about ten lepers whose lives were transformed by Jesus.

“It happened that as he made his way toward Jerusalem, he crossed over the border between Samaria and Galilee. As he entered a village, ten men, all lepers, met him. They kept their distance but raised their voices, calling out, ‘Jesus, Master, have mercy on us!’

“Taking a good look at them, he said, ‘Go, show yourselves to the priests.’ They went, and while still on their way, became clean. One of them, when he realized that he was healed, turned around and came back, shouting his gratitude, glorifying God. He kneeled at Jesus’ feet, so grateful. He couldn’t thank him enough—and he was a Samaritan.

“Jesus said, ‘Were not ten healed? Where are the nine? Can none be found to come back and give glory to God except this outsider?’ Then he said to him, ‘Get up. On your way. Your faith has healed and saved you.'” 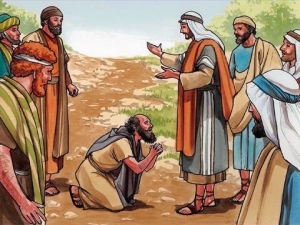 These two stories, one a part of American history, the other told by Jesus, teach us an important lesson. When we are in difficult, life-changing circumstances, it is easy to become so focused on what we are personally going through that we forget to express gratefulness to those who have reached out to us to help us through our trials. In both of these stories, the people who failed to say “Thank you” were probably feeling a bit over-whelmed by what they had just been through. As Nancy says, “ingratitude is not always a calloused, who-cares shrugging of the shoulders. Sometimes it’s just fourth or fifth on a list we never get around to following through on.”

As I read these words earlier this week, my heart was convicted. Most of you know that my husband and I lost our special-needs son David last October. Since his memorial service in December, we have been extremely busy trying to complete a long list of things that were needed to bring closure to this difficult season of our lives. One of those items was writing thank you notes to many who had ministered to us in various ways during this time. Some were sent almost immediately, others after Christmas, but as I read this chapter I was reminded that there were still some important notes that needed to be written and mailed. So this week, my husband Mitch and I have completed another task on the still lengthy list of things needing to be done by writing and sending these last few thank you notes to some special people in the church where we are members. Our church has a theme which I love: Being living proof of a loving God to a watching world. As we have walked through one of the most difficult seasons of our lives, our church has demonstrated this theme to us in real life, and that meant our gratitude needed to be expressed in a concrete way.

Nancy concludes this chapter with five gratitude robbers that we need to beware of and cautious not to give place to.

• Unrealistic expectations. “We can start to expect a lot – from life, from work, from others in general – until no matter what we’re receiving in terms of blessings, it’s never as much as we were hoping for.”

• Forgetfulness. When we remember all God and others have done for us, gratitude is a natural response. “Forgetfulness and ingratitude go hand in hand.”

• Entitlement. “When we take simple blessings for granted as if they were owed to us, or conversely, when we start to think that our house, our car, our wardrobe, or our general station in life is beneath what we deserve, ingratitude finds all the oxygen it needs to thrive.”

• Comparison. “Any time our focus is on ourselves – even if it’s on the good things we’re doing – it keeps us from being grateful for what others are contributing.”

• Blindness to God’s grace. We need to remember that God’s mercies that are new every morning (Lamentations 3:23) “are not blessings we deserve but graces given by God’s loving hand to fallen creatures, those whom He has redeemed by His good pleasure.”

Remembering to thank God is very important, but today’s lesson is a reminder that people also deserve our gratitude whenever that do something that makes our load a little lighter or simply do something that blesses us. Saying “thank you” costs us nothing, and it’s an easy way to spread encouragement to those around us.

2 thoughts on “Thankless or Thankful: Which Will You Be?”

Called to Be Salt and Light in a Dark World

Faithful Heralds For Our King

God’s Script for Our Lives