Did you ever wake up to tornado warnings on the radio? I did one morning this week, but honestly I wasn’t concerned. Tornados have never hit our neighborhood, so I felt safe. Others in Van Vleck, Texas, a coastal area southwest of my hometown of Houston, may have responded similarly to the warnings. But that same day some residents in that town saw the serous effect a tornado can have. Several homes were destroyed and badly damaged, and one woman made the news by lying on top of her young children to protect them from almost certain death as the tornado ripped through their home. As a result, there were injuries but no deaths from this powerful tornado.

Job also knew what it was to have his life changed by “a powerful wind.”  Job 1:19 (NLT) tells us what happened, “Suddenly, a powerful wind swept in from the wilderness and hit the house (of Job’s oldest son, while all his sons and daughters were together there feasting) on all sides. The house collapsed, and all your children are dead. I am the only one who escaped to tell you.” And this wasn’t the first calamity Job had faced. His property had already been attacked by Sebean and Chaldean raiders who stole all his animals and killed his farmhands and servants and had suffered the loss of his sheep and shepherds from a raging fire. And this was just the first set of tests that God permitted Job to go through.

As I shared in the introduction to this series on Lessons from Job, there are two foundational truths we need to hold onto as we move forward in this study of the book of Job:

This leads to a big question: Why did God give Satan permission to inflict such suffering upon a man who loved Him and lived a righteous life? The book of Job doesn’t answer this question. But it does show us Job’s initial response to this round of calamities. Job grieved over his losses, but in the midst of them he worshiped God.

Unfortunately, this wasn’t always Job’s response as we move forward in the book of Job. He was an imperfect human being, just as we are, and when the Lord later permitted Satan to afflict Job’s body he did sin by blaming God. God was in control, He had allowed these tests, and Job didn’t understand.

One of our first questions where suffering comes is WHY?  Many years of walking with chronic illness and other major trials have taught me that this is a question God often doesn’t directly answer.

God has never given me an answer to my whys. Instead, I’ve heard, “Trust me. I’m in control. I love you. I will work in this for your good.” Frankly, these weren’t what I was hoping to hear.

As a young Christian, I didn’t understand. I tried to trust in God’s love, crying out to Him for help, but in the weakness of my flesh I sometimes failed. I went through a season of being angry at God. When He chose to stop the spasms David was having during a time of prayer for him by the elders of our church, I rejoiced. But over the next few months it became clear that the damage already been done was not healed.The miraculous end to the infantile spasms reinforced my belief that God could heal, but the future for our son looked dim. My whys never received an answer, and if you live with chronic illness you may be in the same place.

One Scripture God has spoken to my heart over and over is the one below:

Have you ever had a small child repeatedly ask why?   If so, you’ve probably learned that trying to answer his questions doesn’t help because he really isn’t able to understand the reasons. Similarly, God’s ways are beyond our limited understanding. Proverbs 3:5-6 tells us, “Trust in the LORD with all your heart and lean not on your own understanding; in all your ways submit to him, and he will make your paths straight.”

Trusting in the character of God when we can’t understand the path He has asked us to walk down is a big part of what it is to TRUST HIM! He is loving and faithful, a God of mercy and grace. Make the decision to believe what He says about Himself. Then choose to live with the goal of pleasing Him during your days on earth.  He asks that we TRUST AND OBEY, even when our minds cannot understand His purposes in what we are walking through. Job struggled to do this, and we do too. But it is the next important lesson we are to learn through suffering.

Today, I still do not understand the circumstances God has allowed to touch my life. But I have made the decision to trust Him and not insist upon leaning on my own understanding. This doesn’t mean the desire to understand has gone away. It hasn’t. I still ask God for healing, both for our son and for myself. But learning to live victoriously with chronic illness requires learning to trust that God has a good purpose in what we are going through.

We may not fully understand that purpose during our years on this fallen earth. The answers to our whys may not be given until we see God face-to-face. But my prayer for you is that you will choose to trust God. Trusting God is simply believing what He has revealed about Himself in the holy Scriptures, His Word to us. Out of that trust will come a desire to do those things that please Him. Draw close to God, and He will draw close to you. And in His closeness, you’ll find the strength to keep moving forward, one day, one hour, sometimes one step at a time. Even when healing does not come. 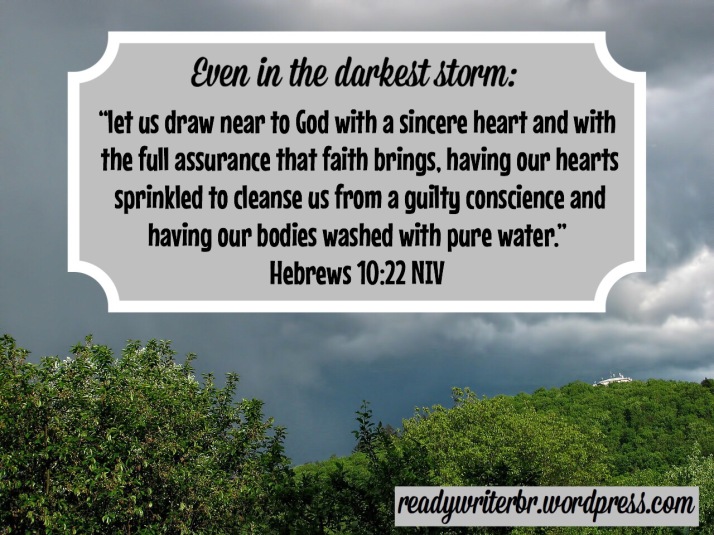