What is it to forgive? According to the Merriam-Webster Dictionary, it is:

Forgiveness is clearly taught in the Word of God, our Guidebook for Life. In fact, in the Lord’s Prayer, Jesus said if we won’t forgive He won’t forgive us. I don’t know about you, but I need Jesus’ forgiveness.

The need to forgive is something most people believe in, but at the same time avoid because of how difficult it is. Instead of “waxing eloquent” about forgiveness, I decided to make some graphics on the subject, one of my favorite things to do. Some use my own words, some are anonymous quotes, and others quote well-known people. Between each graphic, I’m including quotes from Scripture of what Jesus and his followers had to say about this important subject.

“Forgive us our sins, for we also forgive everyone who sins against us.”‭‭ Luke‬ ‭11:4a‬ ‭NIV‬ 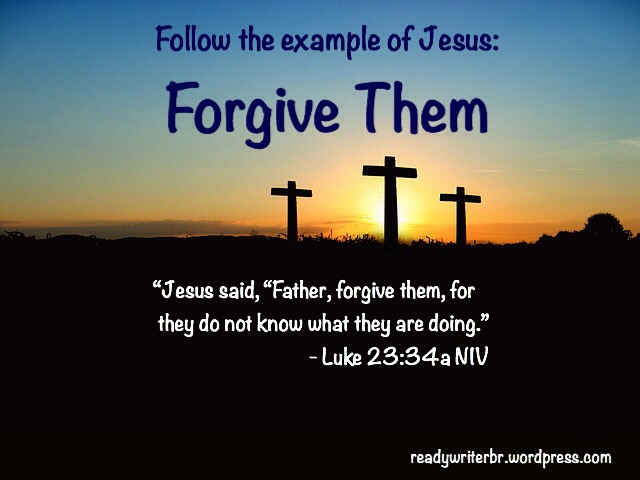 “And when you stand praying, if you hold anything against anyone, forgive them, so that your Father in heaven may forgive you your sins.”  ‭‭Mark‬ ‭11:25‬ ‭NIV‬‬

“If we confess our sins, he is faithful and just and will forgive us our sins and purify us from all unrighteousness.”   1 John‬ ‭1:9‬ ‭NIV‬

“Bear with each other and forgive one another if any of you has a grievance against someone. Forgive as the Lord forgave you. ‭Colossians‬ ‭3:13‬ ‭NIV‬‬

“Even if they sin against you seven times in a day and seven times come back to you saying ‘I repent,’ you must forgive them.” Luke‬ ‭17:4‬ ‭NIV

“Then the master called the servant in. ‘You wicked servant,’ he said, ‘I canceled all that debt of yours because you begged me to. Shouldn’t you have had mercy on your fellow servant just as I had on you?’ In anger his master handed him over to the jailers to be tortured, until he should pay back all he owed. “This is how my heavenly Father will treat each of you unless you forgive your brother or sister from your heart.”         Matthew‬ ‭18:32-35‬ ‭NIV‬‬

6 thoughts on “Tuesday at Ten: Forgive”

El Roi, The God Who Sees Me

Elohim, the All Powerful One, the Creator

Jahweh râʻâh: The LORD Who Shepherds Me