When Hurricane Harvey stalled out over Houston, Texas, and our part of the city was deluged with over forty inches of rain, our church campus received major flooding, leaving several of our buildings unusable. But the Church was not damaged. How is that possible? Simply because the Church is not a building or group of buildings.

While most churches meet in physical structures, the Church itself is made up of people who know Jesus Christ as their Lord and Savior and who meet together in a locality to worship their Lord, study His Word, be trained to do the work God has called His people to do and have fellowship with one another. And this week, we will be examining several names of Jesus that relate to the church, beginning with His headship over the church. 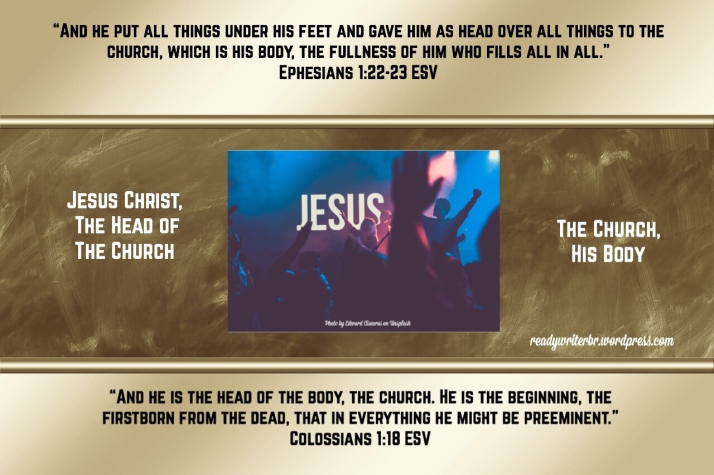 The Church is the Body of Christ and Christ Jesus is its head. The word translated church in the New Testament comes from the Greek word ekklesia, which is defined as “an assembly or called-out ones.”

The universal church consists of all those who have a personal relationship with Jesus Christ. “For in one Spirit we were all baptized into one body—Jews or Greeks, slaves or free—and all were made to drink of one Spirit.” (1 Corinthians‬ ‭12:13‬ ‭ESV‬‬)

Local churches are gatherings of members of the universal church in a certain locality.

In Matthew 16:18, Jesus told Peter that He Himself would build His church, and the “gates of hell” would not prevail against it. Acts 2:47 explains that Jesus was the One who was building His church, and that it was being made up of “those who were being saved.”

“And he put all things under his feet and gave him as head over all things to the church, which is his body, the fullness of him who fills all in all.” Ephesians‬ ‭1:22-23‬ ‭ESV‬

“For no one ever hated his own flesh, but nourishes and cherishes it, just as Christ does the church, because we are members of his body.” Ephesians‬ ‭5:29-30‬ ‭ESV‬‬

“Husbands, love your wives, as Christ loved the church and gave himself up for her, that he might sanctify her, having cleansed her by the washing of water with the word, so that he might present the church to himself in splendor, without spot or wrinkle or any such thing, that she might be holy and without blemish.” Ephesians‬ ‭5:25-27‬ ‭ESV‬‬

“The Spirit of the Lord is upon me, because he has anointed me to proclaim good news to the poor. He has sent me to proclaim liberty to the captives and recovering of sight to the blind, to set at liberty those who are oppressed, to proclaim the year of the Lord’s favor.” Luke‬ ‭4:18-19‬ ‭ESV‬‬

“And Jesus came and said to them, ‘All authority in heaven and on earth has been given to me. Go therefore and make disciples of all nations, baptizing them in the name of the Father and of the Son and of the Holy Spirit, teaching them to observe all that I have commanded you. And behold, I am with you always, to the end of the age.’” Matthew‬ ‭28:18-20‬ ‭ESV‬‬

While each church will have its own local leaders, the ultimate leader of any church is to be the Lord Jesus. The church belongs to Him. He is the head and the only One equipped to adequately lead the church. He is to be given the preeminence, the highest place in rank and influence. And that’s a good thing, because Who better knows how to lead the church than the One Who laid down His own life for her members.

As 2017 comes to an end, our church campus still hasn’t fully recovered from the damage caused by Hurricane Harvey. But our Church is thriving, under the Headship of Jesus Christ and the skilled leadership of its local leaders. And that is something which fills my heart with gratitude.

WORKING OUT OUR OWN SALVATION? BUT I THOUGHT WE WERE SAVED BY FAITH!