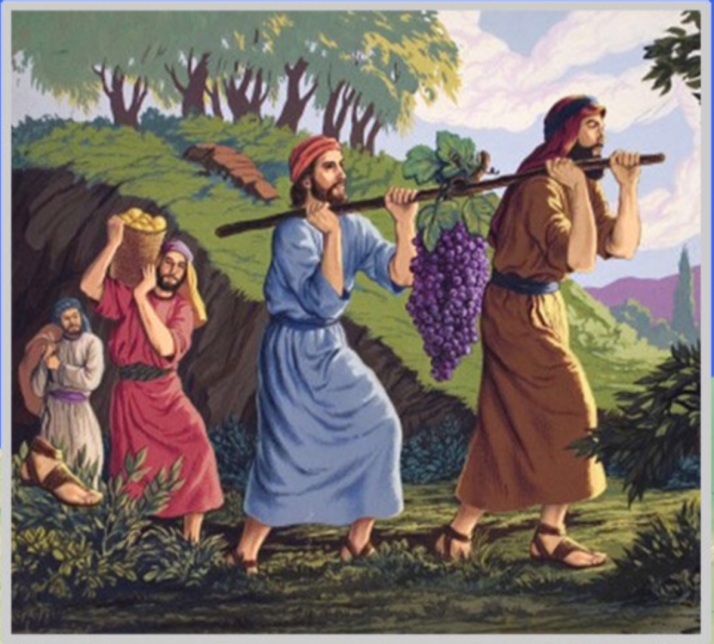 Psalm 13 is a short passage of Scripture, only six verses long, so take the time to read it. As you do, notice the question David repeatedly asks.

“How long, O Lord? Will you forget me forever? How long will you hide your face from me? How long must I take counsel in my soul and have sorrow in my heart all the day? How long shall my enemy be exalted over me? Consider and answer me, O Lord my God; light up my eyes, lest I sleep the sleep of death, lest my enemy say, “I have prevailed over him,” lest my foes rejoice because I am shaken. But I have trusted in your steadfast love; my heart shall rejoice in your salvation. I will sing to the Lord, because he has dealt bountifully with me.”

In these six brief verses, we see the words “how long” four times. Have you ever cried out to God with those same words during a time of waiting that seemed to drag on and on and on? I sure have. We don’t know the exact circumstances that David was facing when he wrote these words. But we do know he was sorrowful, even despairing of life. His enemies were prevailing and he was feeling shaken.

During extended times of waiting, we may feel forgotten or even forsaken. But instead of allowing our feelings to determine our attitude and actions, we can choose to remember what we know about God. We can choose to believe the truths He reveals in His Word. I believe that’s what David did, and it provides a clear pattern for us to follow.

Instead of fixing his eyes on his circumstances, instead of acting on his emotions, David turned his eyes on the Lord. He acknowledges his adversaries, but he also gives thanks to his God.

“And my enemy will say, ‘I have overcome him,’ And my adversaries will rejoice when I am shaken. But I have trusted and relied on and been confident in Your lovingkindness and faithfulness; My heart shall rejoice and delight in Your salvation. I will sing to the LORD, Because He has dealt bountifully with me.” PSALM‬ ‭13:4-6‬ ‭AMP‬‬

On this Thankful Thursday, let’s learn from the psalmist David and reflect on the nature of our God. Where do you see His goodness? His faithfulness? His lovingkindness? Look at your situation and see where there is evidence that God is at work, even during this time of waiting. Then, let’s offer up to Him a sacrifice of thanksgiving for who He is and what He is doing.

“I will offer to you the sacrifice of thanksgiving and call on the name of the Lord.” Psalm‬ ‭116:17‬ ‭

“The one who offers thanksgiving as his sacrifice glorifies me; to one who orders his way rightly I will show the salvation of God!” Psalm‬ ‭50:23‬ ‭ 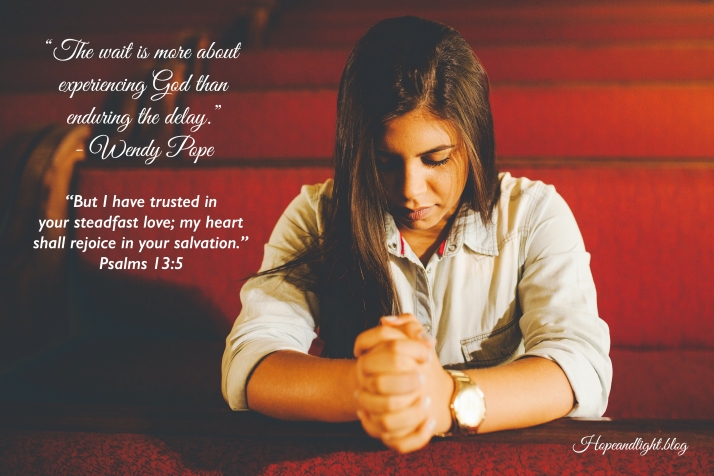 I am in a time of waiting. I have been in a time of waiting since shortly after I heard a call from the Lord last spring to write a Bible study for our small Bible study group at church and made a commitment to do so. I was preparing to get started on this project, even got an outline down on paper, when suddenly my health took a deep dive from which I still haven’t recovered.

Suddenly, my life was filled with one appointment after another, trying to figure out what was going on and come up with a treatment plan for hopefully getting back to where I was before things changed overnight. Unfortunately, since that negative overnight change, there have been no positive overnight changes. Instead, there have been a series of small and gradual steps forward, each including extended times of waiting. 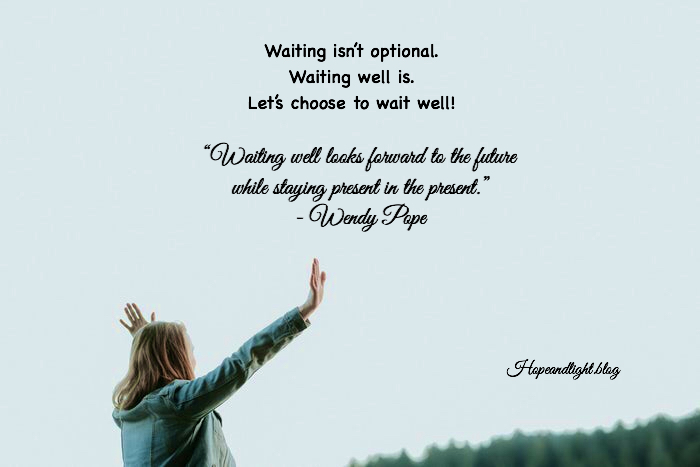 Waiting isn’t optional. It’s a part of life, some times moreso than others. But choosing how we will wait is up to us. Will we wait with complaining and discontentment? Or will we wait with trust in the One Who rules in our lives, remembering He is not only in control of our circumstances but also in control of the timing? Waiting well means continuing to look forward to the future we’re moving toward while living faithfully where God has us right now.

How do we wait well? God’s Word gives us several answers to this question. Let’s look at a few from the book of Psalms (all verses in ESV)

One of the best ways to wait well is to turn a time of waiting into a time of worship. Worship causes us to shift our focus off of our limiting circumstances and onto our limitless God. Let’s choose to wait well, and let’s back up that choice by turning our hearts toward the Lord in worship.

The Fruit of Faithfulness

Called to Be Salt and Light in a Dark World

Faithful Heralds For Our King

God’s Script for Our Lives